The center of the hall 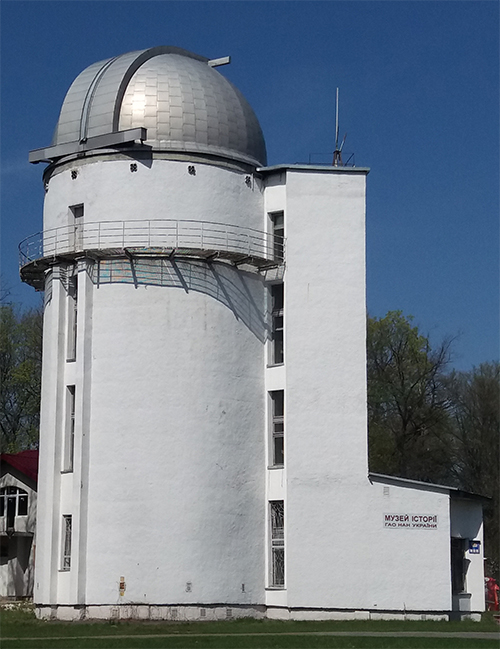 Museum of MAO NAS of Ukraine located in the pavilion of the Toepfer double long-focus Astrograph. Visitors are met with a poster informing that after the Main Astronomical Observatory of National Academy of Sciences (Holosiivskyi) the minor planet number 15675 entitled "HOLOSYEYEVO" (GOLOSEEVO).

Subsequently, the research fields expanded: the programs started at that time were the study of the moon and planets, variable stars, galaxies, solar physics, the Earth's rotation and more. The new instruments were established: a small solar telescope with a spectrograph, chromospheric telescope reflector AZT-2, a horizontal solar telescope ATSU-5. Later, the Carl Zeiss Jena double wide-angle astrograph was put into operation. In 1964 the building of the mechanical workshop was built, and in 1977 the construction of a new laboratory building was completed. In one of the small towers, the laser rangefinder has located. In 1991 a new building for precision mechanics and optics was put into operation.

In 1970 the construction of the high-altitude observational base on the Terskol peak (Caucasus) started.

Many famous scientists, cosmonauts, were the guests of the Observatory. There are many memorable photos about these visits in the museum. Some of the famous visitors left their signs in remembrance on the column of the double wide-angle astrograph.

In the office on the left hand, there is an exposition of measuring instruments used for the measuring of star images on the photographic films and plates in 50-70th of the last century: microphotometer, blink-comparator, Ascorecord and others.

Here, there is an exposition of the photographic portraits of the heads of the first astrometric divisions of the Observatory: O.Ya.Orlov, A.O.Yakovkin, Ye.P.Fedorov, I.G.Kolchinsky, as well as the first observers O.K.Korol and I.G.Kolchinsky. The exposition is dedicated to their contribution to the development of the studies in the field of the fundamental and photographic astrometry, selenodesy, and the Earth's rotation.

O.Ya.Orlov is recognized as a founder of the global geodynamics. His classic works combined the methods of astronomy and geophysics for the investigation of the Earth as a planet. His highly talented follower Ye.P.Fedorov gained the worldwide fame by his theoretical research in the field of the Earth's nutation wich put the basis for the further developments of scientists from different countries. Their achievements were highly appreciated and marked by the R.Descartes Award. Among the winners was the acting Director of the Observatory Ya.S.Yatskiv. The unique series of polar coordinates over the 100 years period obtained by the MAO scientists was widely used for geodynamic researches.   For a long time, the world priority in the study of the rotation of the Earth with classic methods was for MAO.

The heritage of the world science is not only catalogs obtained by the vertical circle but also the series of selenodetic catalogs which formed the reference system of selenodetic coordinates  4900. The development of the Moon studies in the Observatory was carried out thanks to the coryphaei A.O.Yakovkin and his follower I.V.Gavrilov. Two craters on the Moon are named in their honor.

I.G.Kolchinsky was the founder and the first head of the Department of the Photographic Astrometry. His works on the study of the instability of the Earth's atmosphere are widely known in the world.

Some stands are devoted to the present state of the astrometric research, in particular, to the participation of the Observatory in international projects such as International Earth Rotation Service (the Department of the Space Geodynamics) and HIPPARCOS (the Department of the Astrometry). The scientists of the Observatory gained the first State Prize of Ukraine in the fields of science and technology in 1983 for the series of researches "The theoretic development and practical implementation of coordinate systems for geodynamics, selenodesy, and space research".

Here, one can find also the showcases with personal things belonged to I.G.Kolchinsky and Ye.P.Fedorov as a tribute to the eminent scientists for their substantial contribution to astrometric science.

There is an exposition of historical subjects of the early period of the Observatory - the old furniture, calculation facilities and others which can restore the atmosphere of the formation and the first steps of the Ukrainian astrometry.

In the round hall of the second floor, there is an exposition of gifts and letters of greetings on the occasions of jubilees of the Observatory and other memorable dates. Here, in the showcases, the album with historical sketches of the initial project of the observatory building is exposed as well as badges with logos of different observatories, scientific meetings, and conferences, postmarks, samples of meteorites, and the envelope with the autograph of Neil Armstrong - the first man who visited the Moon.

The gallery of photographic portraits introduces Sh.G.Gordeladze - the first Scientific Secretary of the Observatory and the initiator of the astrophysical research, V.P.Tsesevich - the second Director of the Observatory, Ye.A.Gurtovenko - the founder of the Department of the Solar Physics, V.P.Konopleva - one of the most devoted researchers of comets.

The intensive astrophysical investigations started in 1959 after the installing the 70-cm reflector (AZT-2).

The first years of astrophysics in the Observatory were tightly connected with names of Sh.G.Gordeladze and V.P.Tsesevich. They did very much to provide the Observatory with state-to-the-art scientific instrumentation. They also put the cornerstone into studies of stars and galaxies.

The studies of comets in the Observatory were initiated and widen by V.P.Konopleva. The most significant results were reached in the theoretic works. The foresight of the nature of comet cores made by L.M.Shulman was successfully approved during Halley mission in 1986. MAO NAS of Ukraine was the most active participant in that mission.

The Department of the Solar Physics was founded by Ye.A.Gurtovenko. Here, there is an individual exposition in his honor. In the Department, the diapason of studies was very wide. Firstly, the Department joint to the Solar Service of the USSR. It was very important for different aims, in particular, for the cosmonautics. The installation of highly automated ATSU-5 telescope favored the investigations of active solar formations such as protuberances, flares etc.  The theoretic conclusions permitted to obtain new data about physical processes on the Sun.  The staff of the Departure took an active part in the observations of total solar eclipses, in particular, on the observational site on Cook Island.

The part of the exposition exhibits the current state of astrophysics research in MAO NAS of Ukraine, in particular, it concerns the participation of the Department of Solar Physics in the space mission CORONAS.

The other stand is devoted to the construction of the High-altitude observational base on Terskol peak in Elbrus region (now International Center for Astronomical, Medical, and Ecological Research), started in 1970 and successfully finished by the installation of Zeiss-2000 telescope.

In 2003 scientists of the Observatory won the State Prize of Ukraine in the fields of science and technology "The development of theoretical basis and the unique observational base in Golosiiv and on the Terskol peak for studies of the Sun and Solar System bodies".

One of exposed museum pieces is the book with the autograph of S.Chandrasekhar presented by E.G.Yanovitsky.

This instrument was built in 1912-1914 by Otto Steinheil for Babelsberg observatory near Berlin. In 1949 it was moved to Golosiiv and installed in the old pavilion. Now there left only the foundation of that pavilion near the new one where, at present, this Museum is located.

During its operating period  (1949-1986) more than 6000 direct photographic plates were obtained. The main observational programs performed on the astrograph:

Several generations of observers conducted the observations on the astrograph. Persons who first mastered the telescope were I.G.Kolchinsky, A.B.Onegina, I.V.Gavrilov. Thanks to them the general observational programs were adopted. Those programs later permitted the Observatory to make its contribution to astrometric science.  Catalogs of absolute proper motions relative to galaxies made in the framework of the faint stars catalog project served as a basis for calibration of HIPPARCOS proper motions.

In the time-service room, there is an exposition of old clocks and chronometers. Here one can see the photos of the stages of development of astronomical instruments from a quadrant of Ulughbek observatory to Hubble telescope. There is also the map of the Moon with marked craters named in honor of A.O.Yakovkin and I.V.Gavrilov.